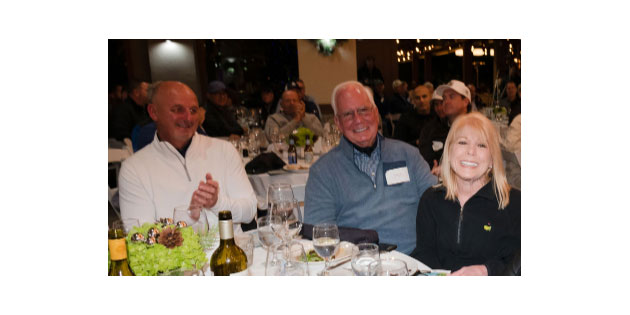 Behind the scenes of their work on retail and factory floors, industry leaders drive support for City of Hope year-round. A few longtime sponsors of the annual West Coast Golf & Tennis fundraising event shared how and why they give support to inspire others.

City of Hope is one of the largest cancer research and treatment organizations in the United States and a leading research center for diabetes and other life-threatening illnesses. It has been the philanthropic partner of the furniture industry since 1965, when the International Home Furnishings Industry group formed to support City of Hope, primarily through two events, the West Coast Golf & Tennis Tournament and The Spirit of Life® Award Dinner.

“What City of Hope does impacts the world with new discoveries, clinical trials, drug therapies and world-class care. We will always actively support it,” said Martin Ploy, president of AICO and 1989 Spirit of Life honoree. “When it comes to City of Hope, we are all in.”

One of the highest profile sponsors of City of Hope, AICO has supported the golf tournament since the 1990s. Its support has expanded to The Spirit of Life Award galas, Walk for Hope and hosting City of Hope’s bloodmobile twice a year. Ploy said AICO founder and Chief Executive Officer Michael Amini “saw what the organization was able to accomplish and where it is going, and he believed in its mission.”

In 2009, the Michael Amini Transfusion Medicine Center at City of Hope opened its doors as one of the largest hospital-based donor centers in the country for apheresis, donor matching and marrow transplants.

For mattress retail giant Sit ‘n Sleep, the golf tournament launched 30 years of support when its president, Nelson Bercier, was invited by a vendor to the Southern California event. He and CEO Larry Miller are ardent supporters, and the philanthropic partnership with City of Hope is part of the company culture with 20 or more associates participating in the annual golf tournament in addition to other events.

“It’s not about golf. It’s about the mission. City of Hope is the first line item in our budget for charitable giving every year, and our sponsorship has grown beyond golf over the past 15 years,” said Bercier, who was a Lifetime Achievement honoree in 2006 and served on the fundraising committee for a few years.

He added, “We’ve had associates and family members affected (by cancer/diabetes), and we have seen that without the research, some of them may not still be with us.”

Family-owned, top 100 furniture retailer Jerome’s Furniture has been a supporter of the golf and tennis tournament since the early ‘90s. Jerome’s co-owner Ann Navarra was the first Lifetime Achievement honoree in 2001 and has battled breast cancer twice.

“The Navarra family has been touched with cancer, and City of Hope is very important because of personal connections. We’re proud to be part of an institution dedicated to helping make a difference in people’s lives,” said Brian Woods, Jerome’s CEO.

“Our hope is that our ongoing contributions in support of our peers provide the momentum needed to generate overall participation,” said Luke Parker, Living Spaces executive vice president of merchandising and supply chain.

Seventy-six-year-old, family-owned furniture resource Parker House has been a top sponsor of City of Hope for more than a decade, beginning with the golf tournament and later adding its support to The Spirit of Life Award galas. Parker House CEO Chris Lupo and CFO Victor Zonni were Lifetime Achievement honorees in 2017.

“We have all been impacted one way or another by cancer and diabetes,” said Lupo. “Victor and I have had several friends and family members directly affected by these diseases. For those who have visited City of Hope, they all shared the same experience. Not only does City of Hope offer the most advanced treatment, City of Hope also welcomes everyone as if they are their own family the minute you walk in their door.”

For Acme Furniture, its strong support for 15 years and counting began with one person. CFO Melvin Hui explained it simply, “Rick Powell’s passion got us involved with City of Hope.”

Powell is president of Ashjer LLC and devotes his time to helping nonprofits raise money. He was co-founder of Powell Company with his father, Larry Powell, and was honored with City of Hope’s Spirit of Life Award in 1992. Since then, he’s spearheaded the tournament, causing it to become one of City of Hope’s top-grossing annual events.

“The West Coast Golf & Tennis Tournament is the seed, but the people of this industry are the sunshine and the water. We will always need more sunshine and water to grow something that changes people’s lives every day,” said Powell. “The tournament is also the networking event of the year on the west coast, so if you’ve never attended or are not yet signed up, I strongly encourage doing so today.”

To learn about the tournament and register online, click here, contact Loren Boyko at 626-222-9764 or send an email to furniture@coh.org.

About City of Hope

City of Hope’s mission is to deliver the cures of tomorrow to the people who need them today. Founded in 1913, City of Hope has grown into one of the largest cancer research and treatment organizations in the U.S. and one of the leading research centers for diabetes and other life-threatening illnesses. As an independent, National Cancer Institute-designated comprehensive cancer center, City of Hope brings a uniquely integrated model to patients, spanning cancer care, research and development, academics and training, and innovation initiatives. Research and technology developed at City of Hope has been the basis for numerous breakthrough cancer medicines, as well as human synthetic insulin and monoclonal antibodies. A leader in bone marrow transplantation and immunotherapy, such as CAR T cell therapy, City of Hope’s personalized treatment protocols help advance cancer care throughout the world.

With a goal of expanding access to the latest discoveries and leading-edge care to more patients, families and communities, City of Hope’s growing national system includes its main Los Angeles campus, a network of clinical care locations across Southern California, a new cancer center in Orange County, California, scheduled to open in 2022, and Cancer Treatment Centers of America. City of Hope’s affiliated family of organizations includes Translational Genomics Research Institute and AccessHopeTM. For more information about City of Hope, follow us on Facebook, Twitter, YouTube, Instagram and LinkedIn.

Read other articles by Nicholas Ledoux

The Benefits of Getting a Housekeeper