Our Pool Dig Has Begun!

Installing a new pool is definitely a process. You can’t get in a hurry for sure and we’ve been told from Georgia Classic Pools that 4 months is the timeframe for finishing our pool. The dig happened last Friday and now we are moving along at a pretty rapid pace the first week after the dig. The next step was plumbing and then rebar installed and all all that was completed in one week. We hope the pool will move along faster than the schedule indicates, but we will have to be prepared for the whole process and the timeframe it might take. This is our first pool, so we are novices on all of this, but we sure are excited about the final outcome!

If you missed my pool planning post, be sure and read that first to catch up on what we re doing.

Just as a reminder, here’s our backyard after we moved in. The grass back here suffered in the last almost 5 years we’ve been here and did not look this good after the first couple. Maybe too much shade and a big dog didn’t help either. 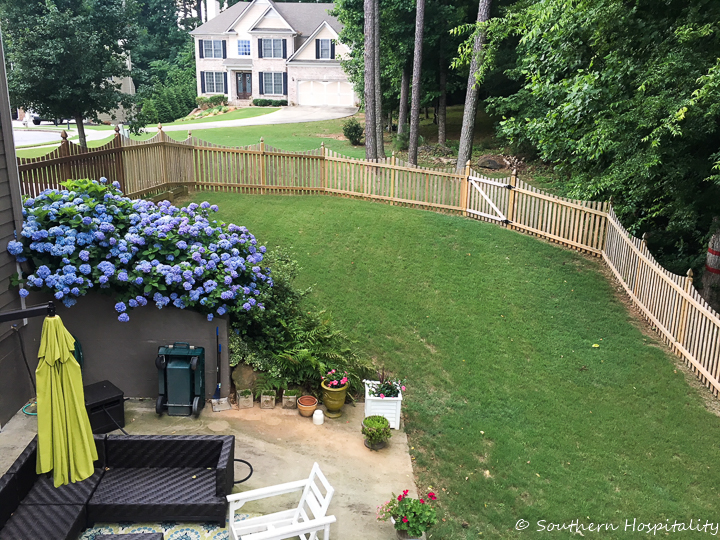 It looked really good here just after we moved in, before we did any projects back here. We knew we wanted to do something else back here landscape wise, but I’m glad we waited awhile until we figured out the pool. The pool will definitely take up a big portion of our backyard, but we are fine with that. 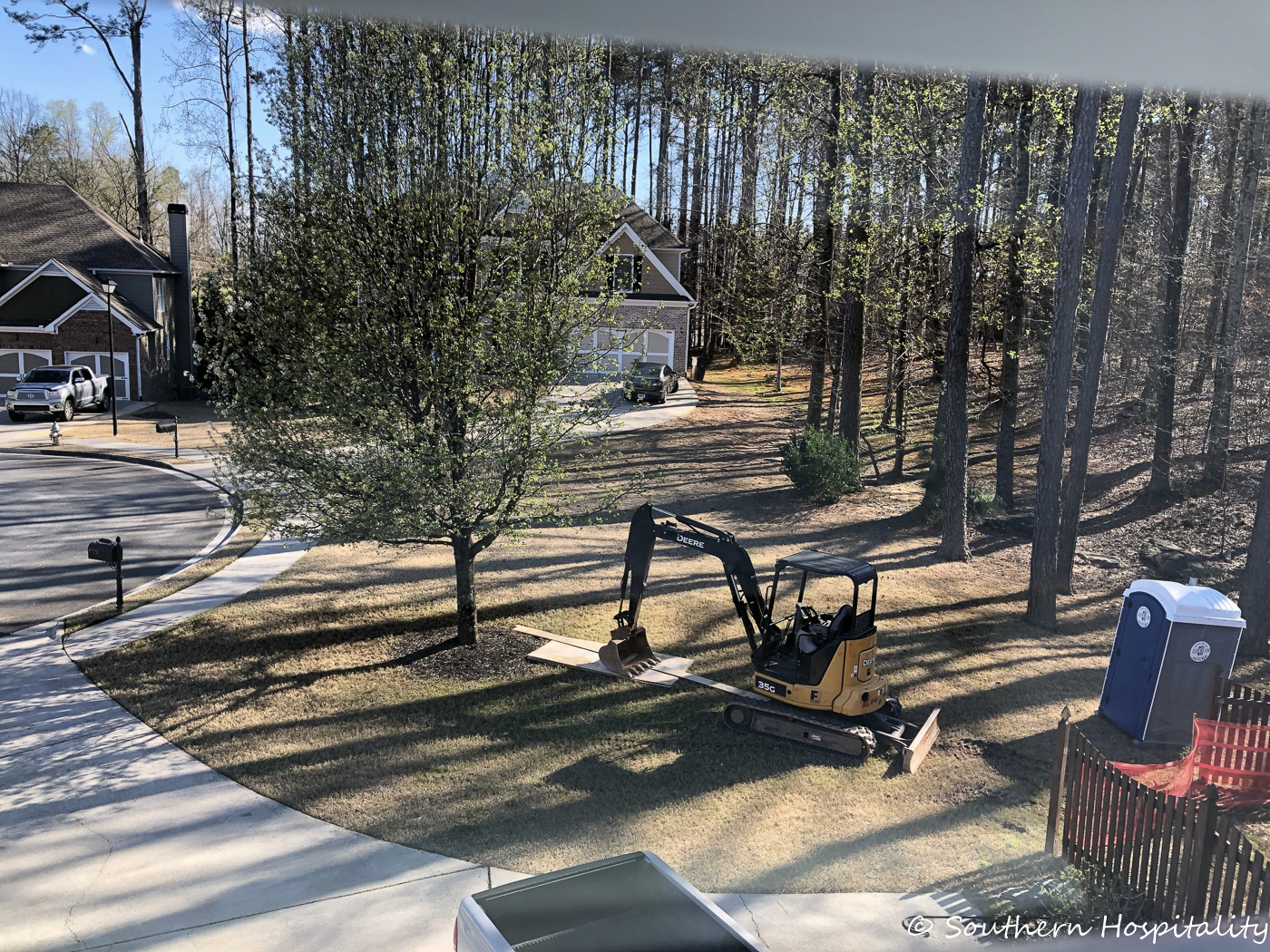 A Porta Potty arrived a couple days before the pool dig and this large backhoe also arrived. We knew it was going to be a big mess, but it’s a real eye opener to watch a pool being dug. A few days before the dig, a crew came out and installed that silt fence you see, the black and orange fencing to keep dirt from going out of the yard. 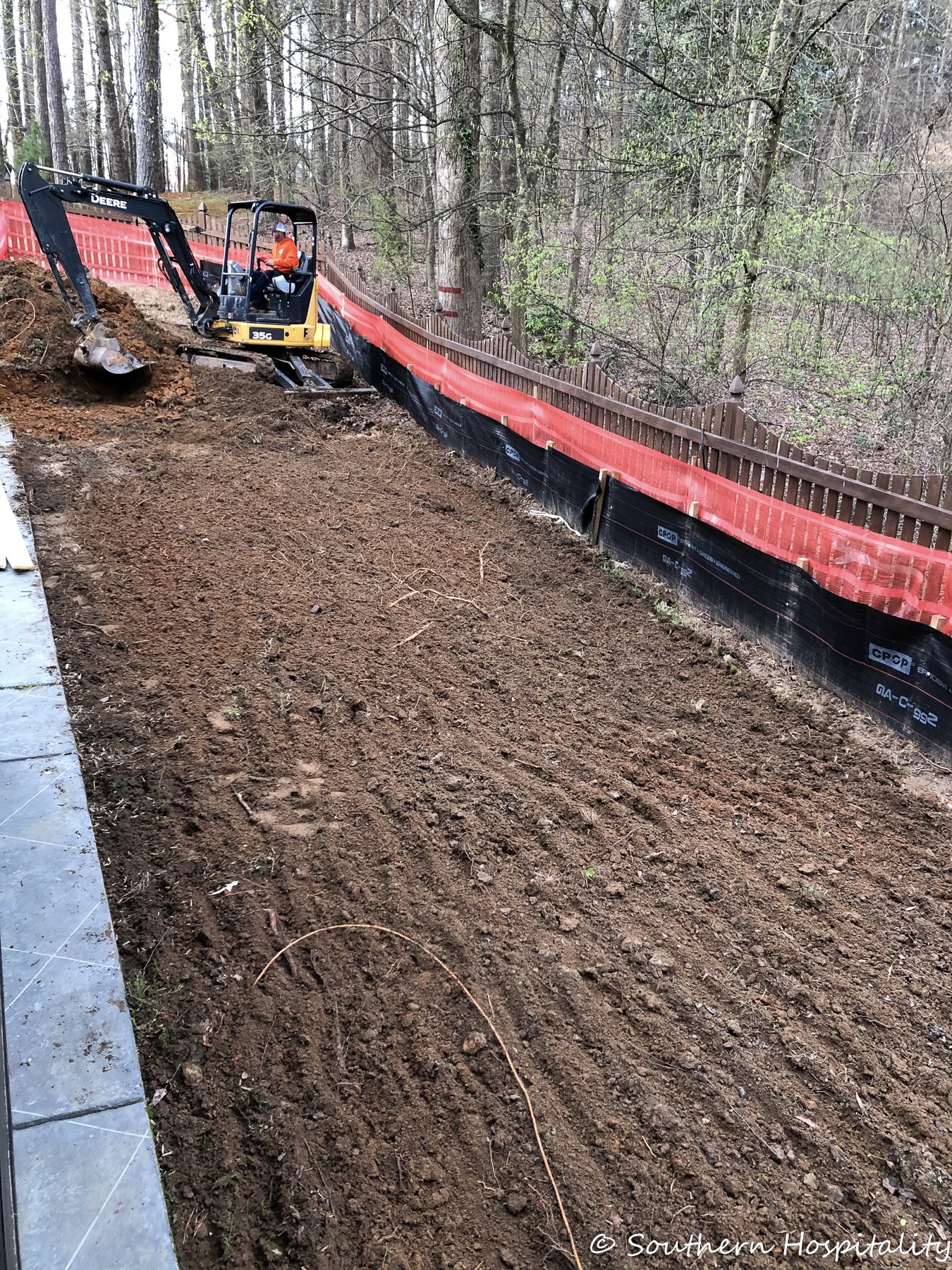 I was out of town that Friday, but Mark was sending me pics and we Facetimed a couple times that day as things happened. It was exciting and scary at the same time to see everything being messed up. 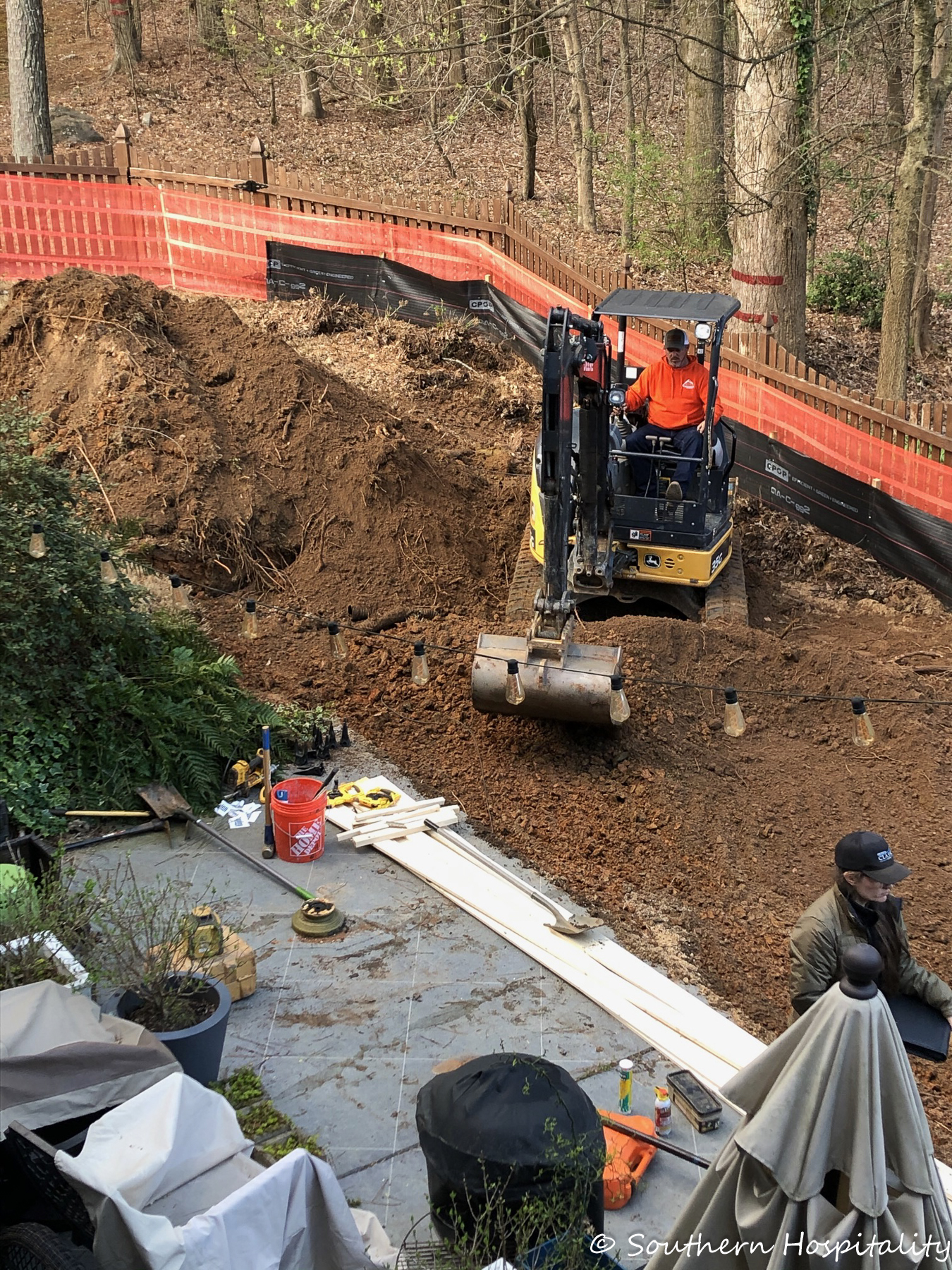 The backhoe began moving dirt around. I know they hauled a few dump trucks of dirt out, not sure yet how many. I had dug up most of my hydrangeas but there were a couple left that were in the line of fire, so I’m trying to save all I can. I put them in planters on the patio for now and hope to relocate them after we finish. 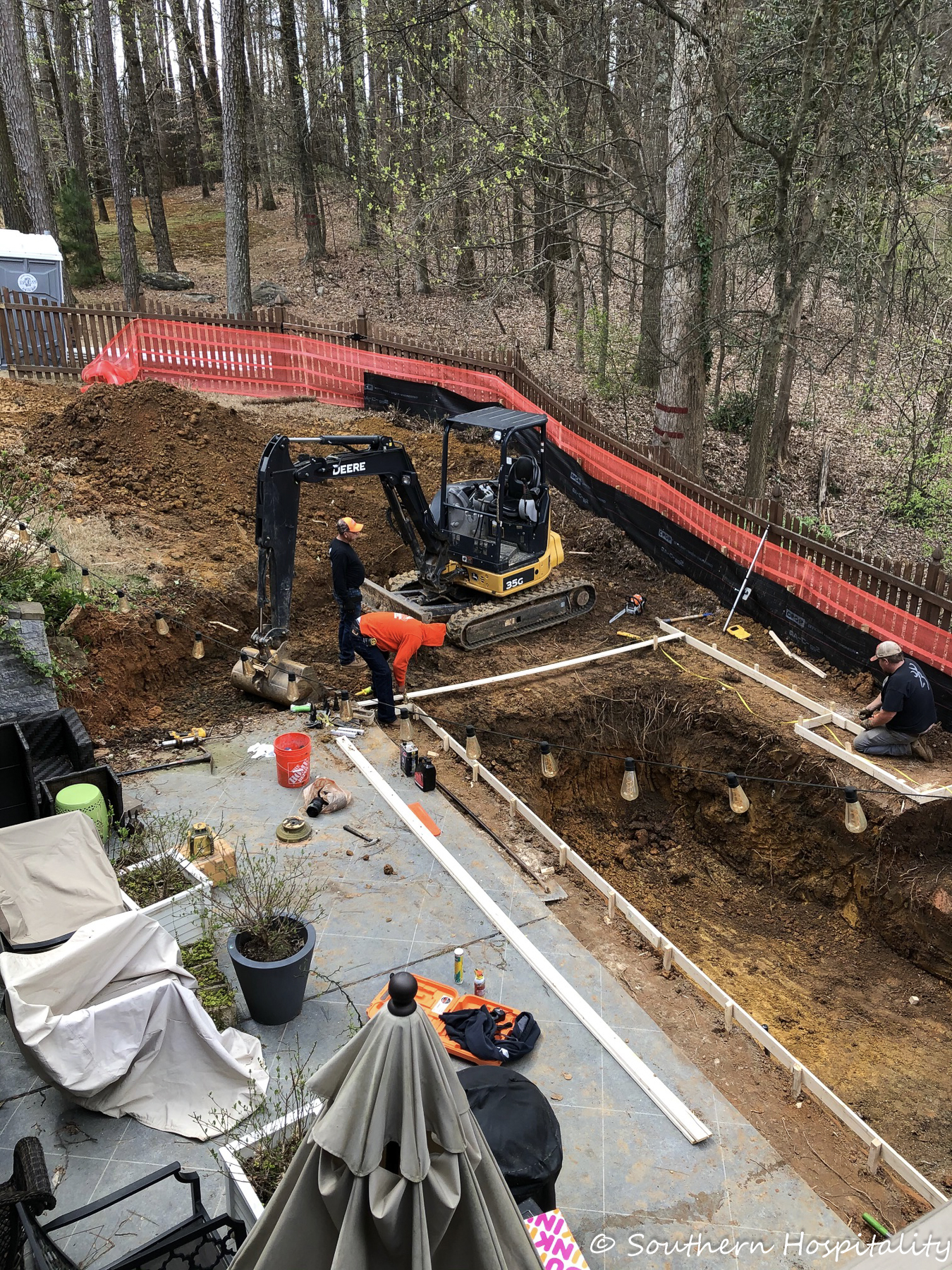 Once the main hole was dug, they added the wood to the sides, to define the pool perimeter I think. 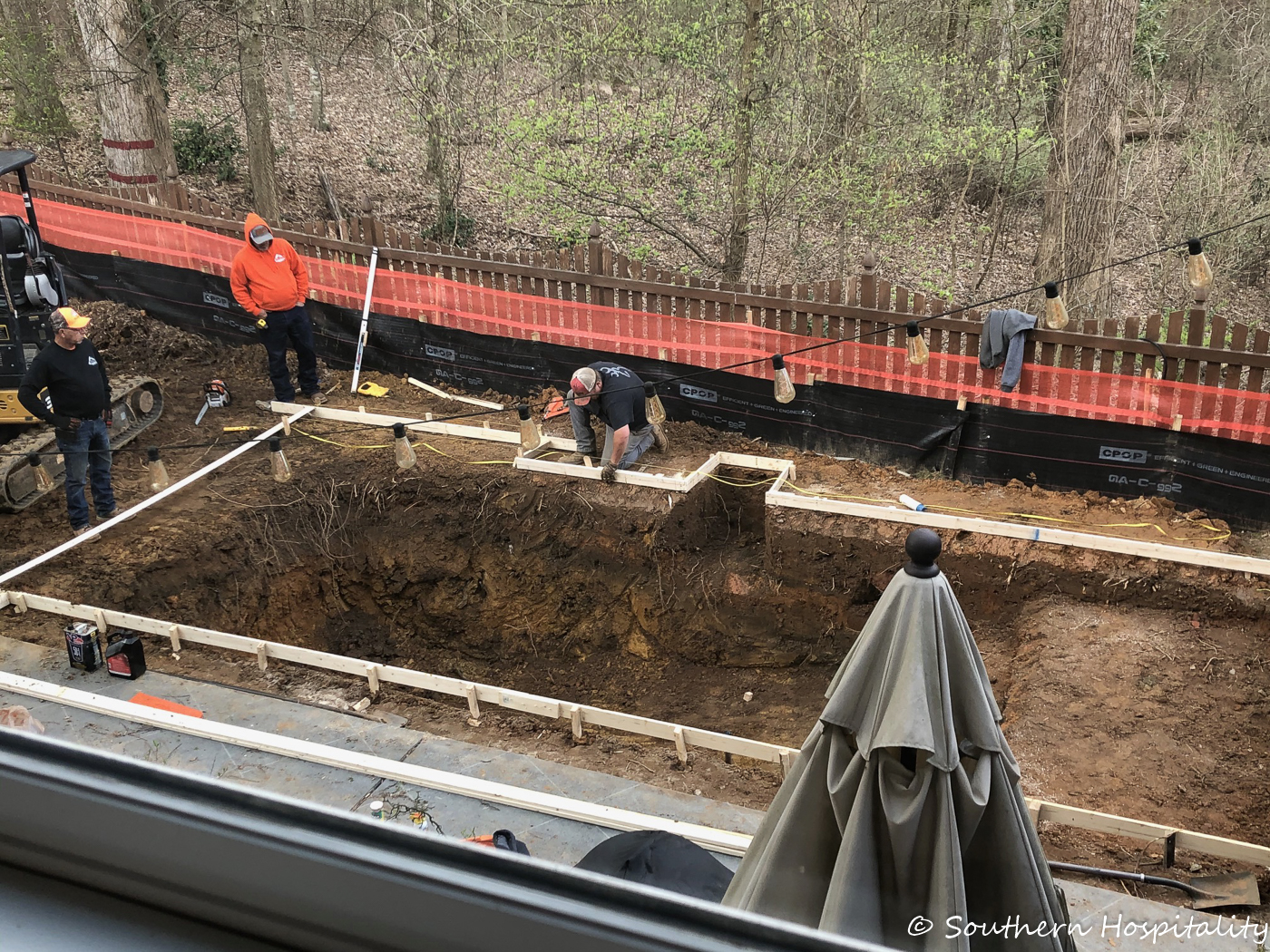 It was so fun to see it start to come alive after seeing the drawings. 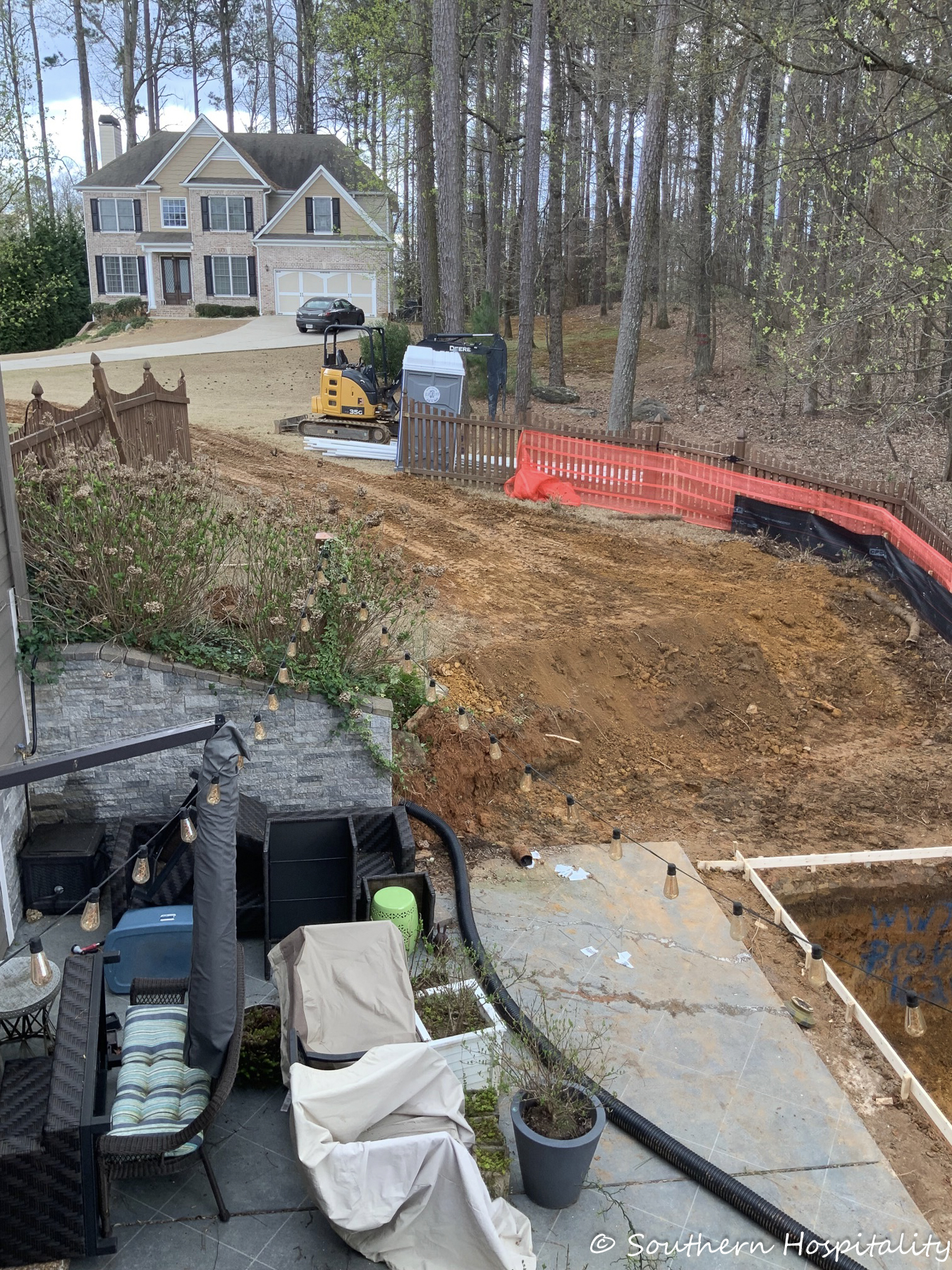 You can see that 2 panels of our fence came out too to prepare for the equipment to come through. Mark told them to come off the sidewalk in our culdesac to bring the dirt in and out and now we have a dirt road leading to the backyard. We will have to repair our Bermuda sod after this is all done. 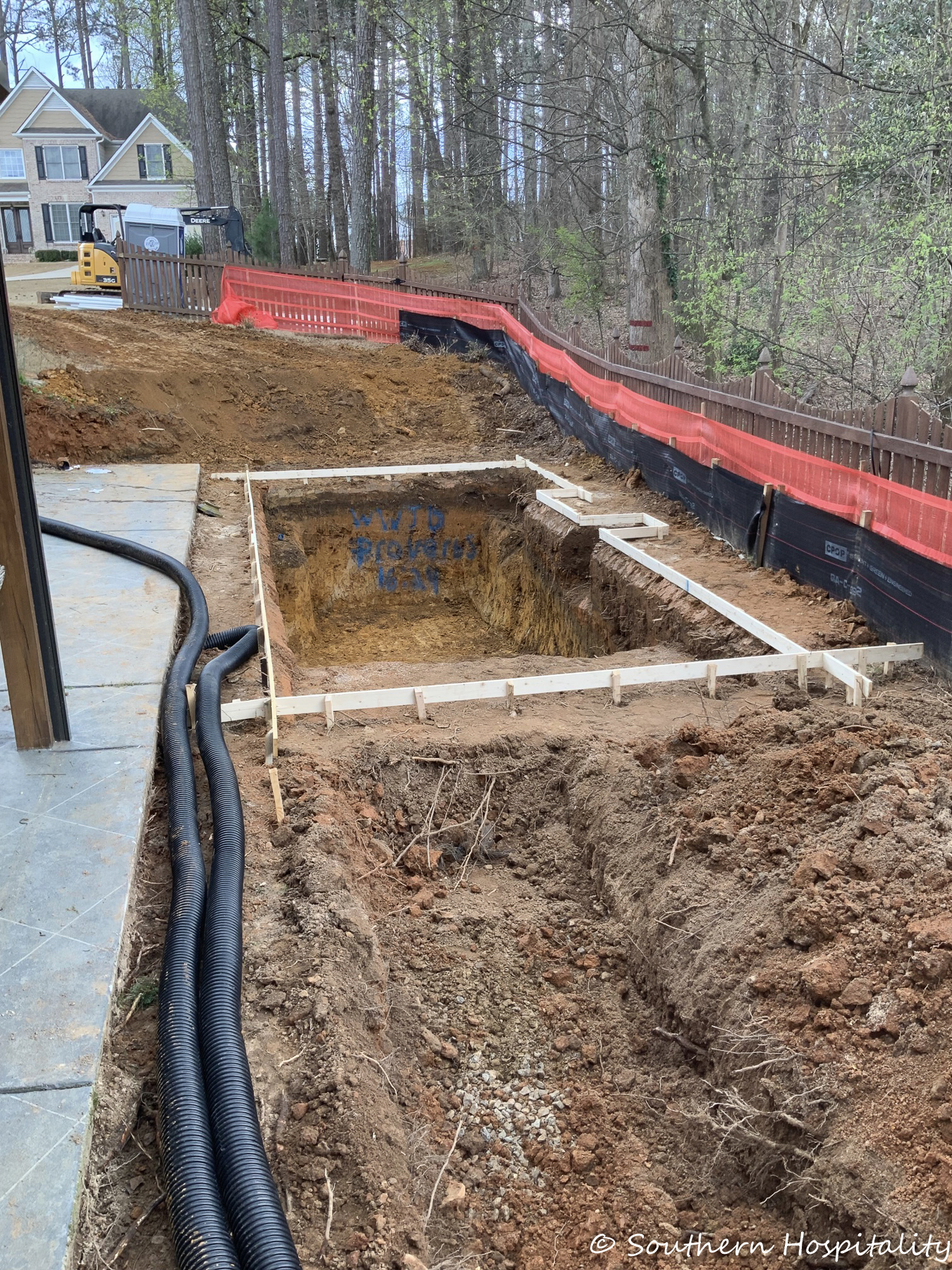 The pool has taken shape and another big trench was dug for the plumbing pipes to go in. We are putting all the pool equipment on the side of the house behind the stairs, so it will all be out of the way which we are very happy about. 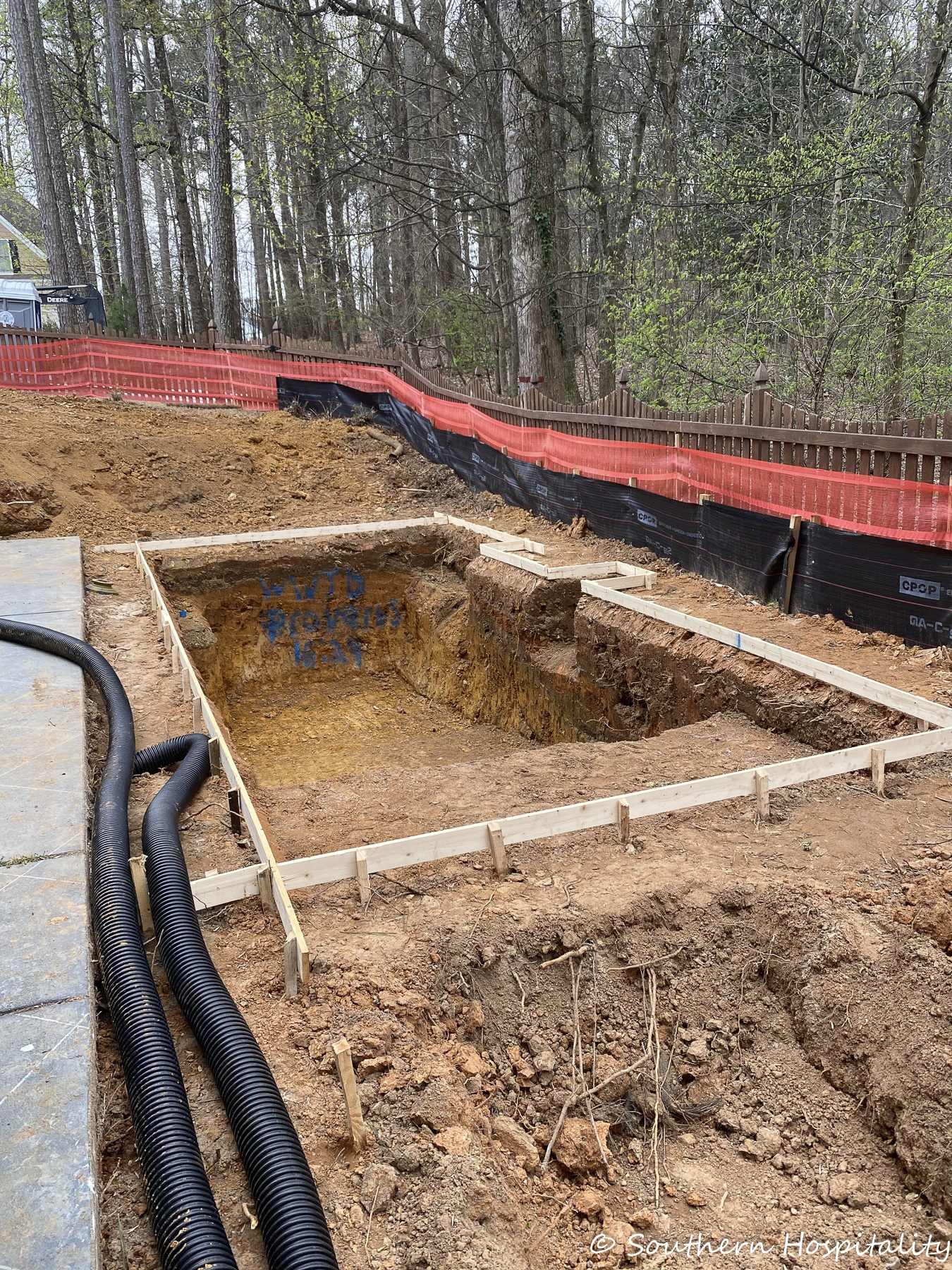 The pool will be about 8′ wide and 23′ long. There will be a 4′ tanning ledge on the top, which will have water on it too and be a fun place for the kids to play and a good spot to sit and cool off. 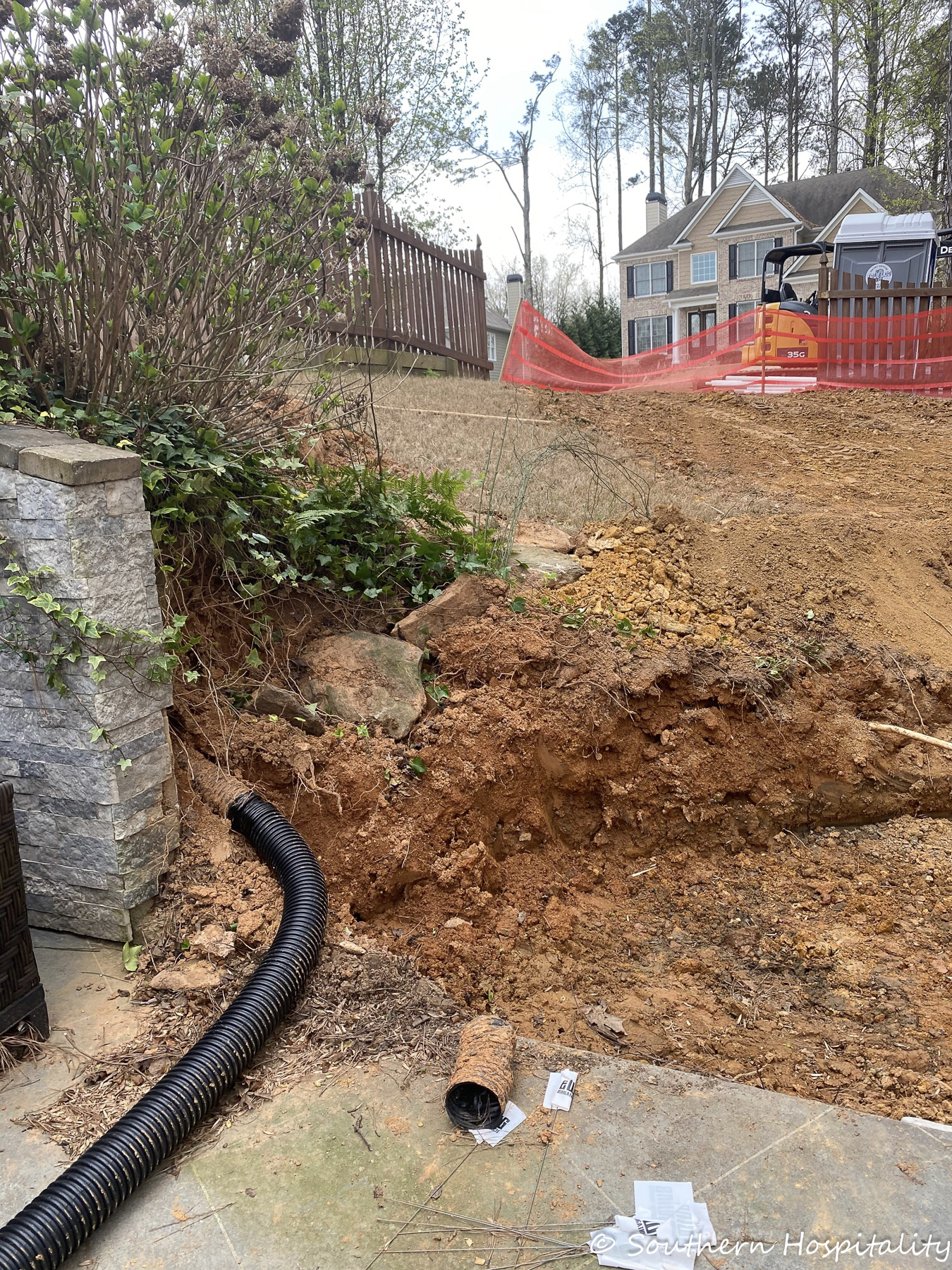 I knew some of these plants would have to come out so we lost a big azalea and some beautiful ferns that were here. There are some ferns left and this is where a small retaining wall will go. This will help with water runoff in our backyard since it slopes downward back here. The retaining wall will come off the existing wall we have and we will landscape around it after we are finished. All of that is to be determined when the pool is complete. 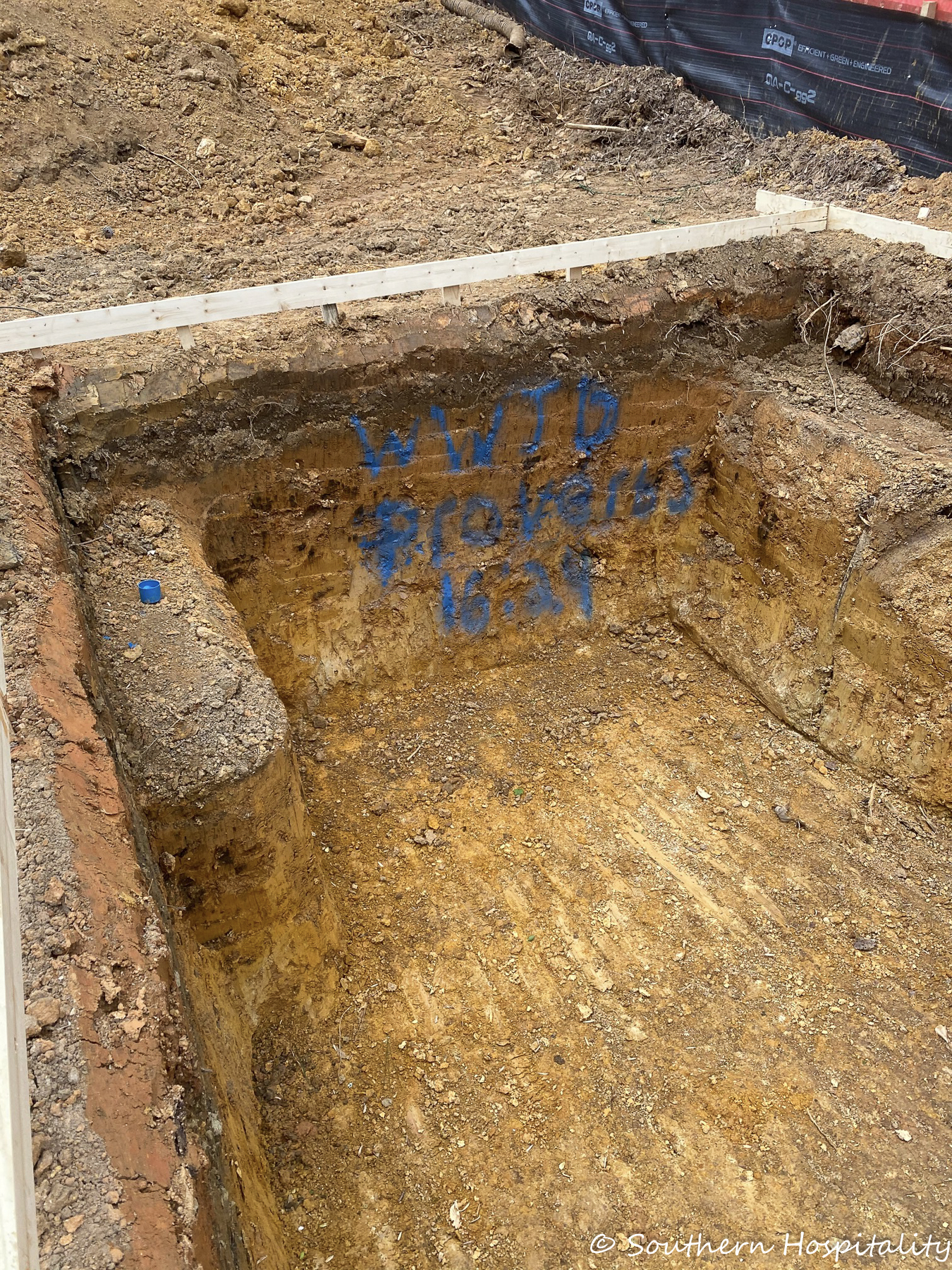 The company we’re working with is Georgia Classic Pools and they are a Christian based organization, which I like. The guys added this scripture verse on the pool wall: Proverbs 16:24. I thought it might be about water, but it’s just a sweet verse.

Proverbs 16:24: Gracious words are a honeycomb, sweet to the soul and healing to the bones. 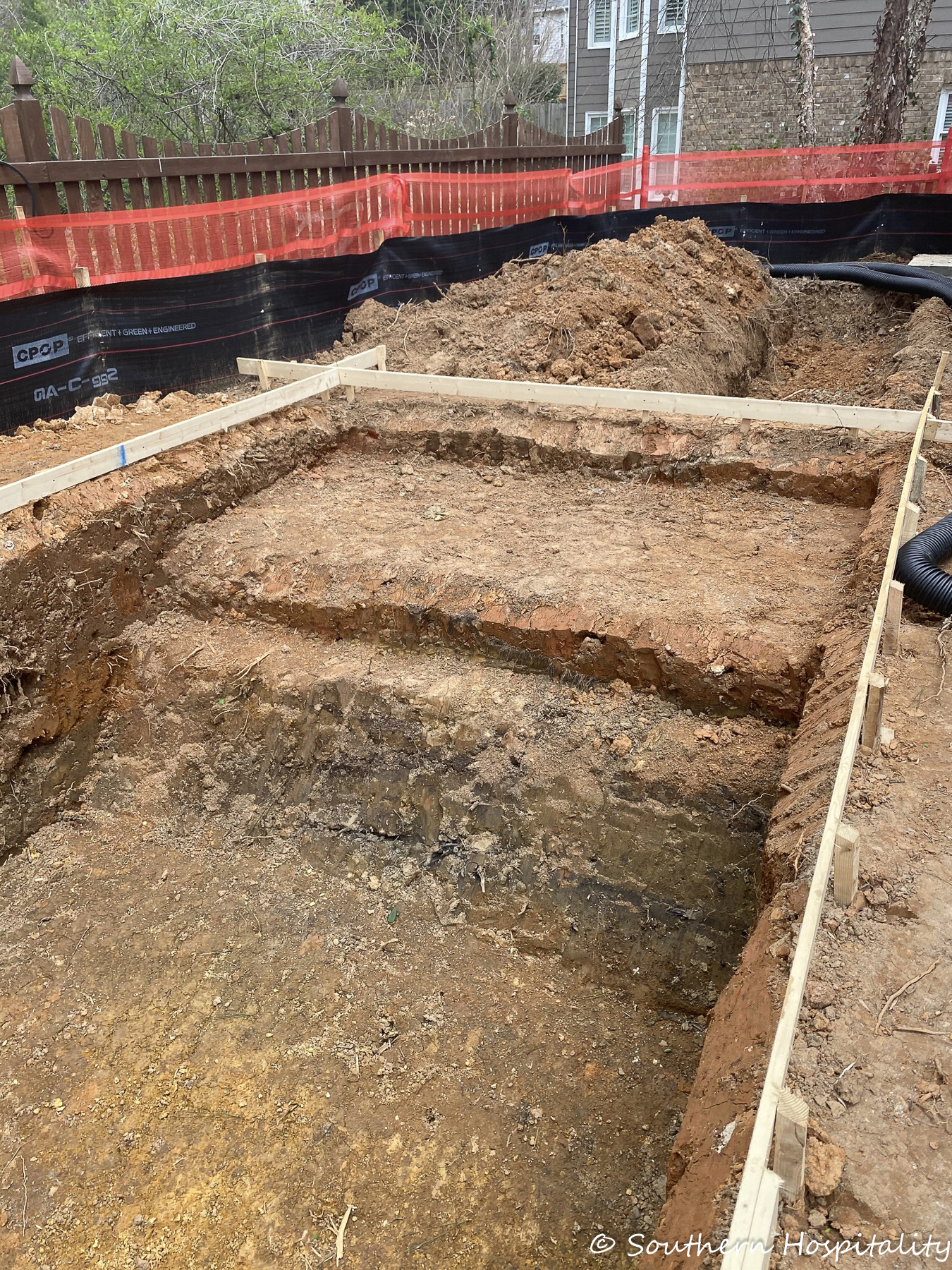 This is the tanning ledge view. Again, it will be 4′ in wide and the steps will go down from there. We’re getting a handrail on the woods side because we may need one later on. 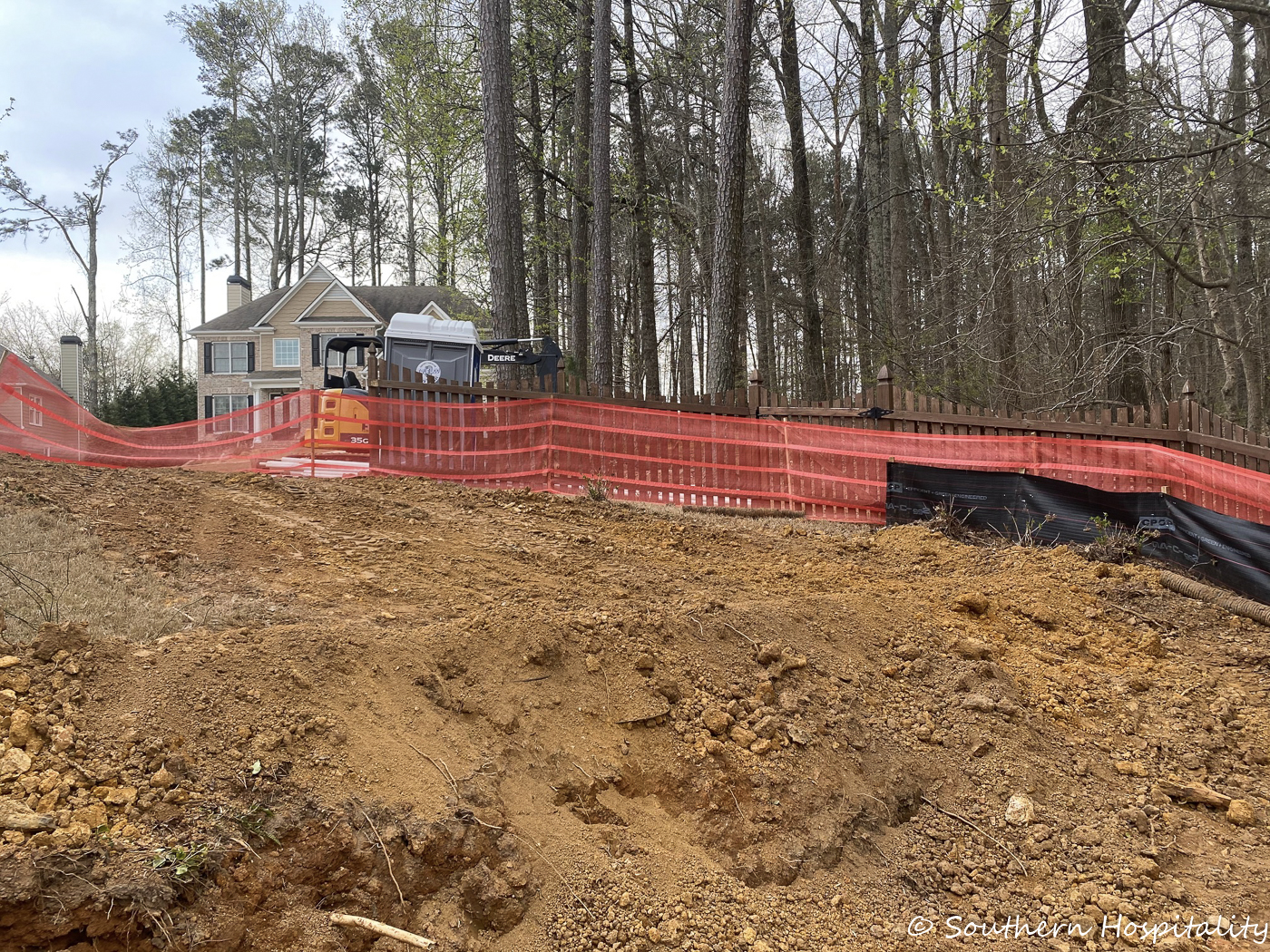 We’ve got quite a slope going on here, so will need to figure out what we want to do with it all. I am thinking some large granite steps would be nice coming in the gate down to where the pool is to ease the slope of the land. We had planned to do that anyway one day. 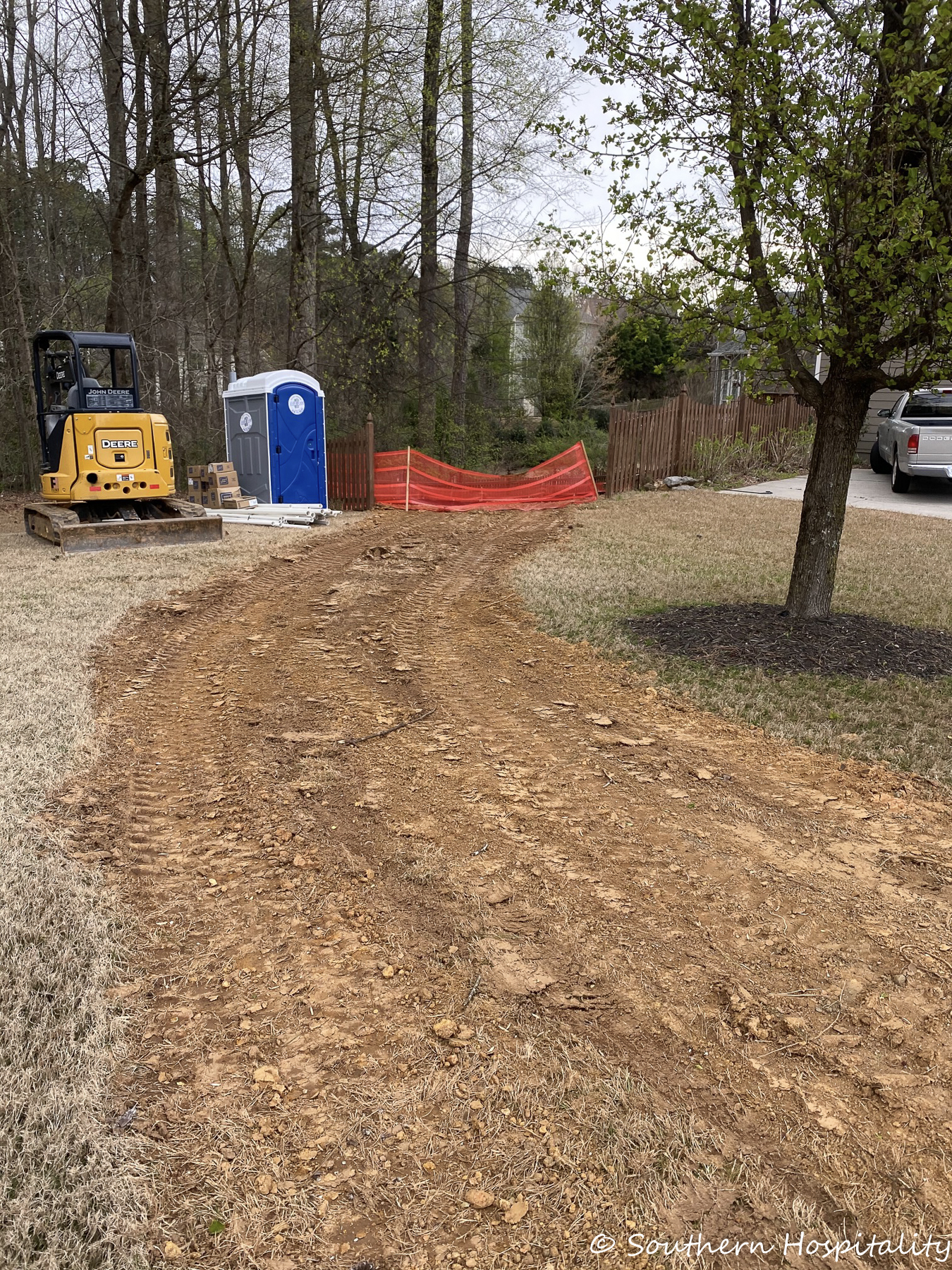 Here’s our dirt road going down to the pool. It’s pretty major when a backhoe comes in. They can destroy the lawn in no time. We will be responsible for getting this repaired. 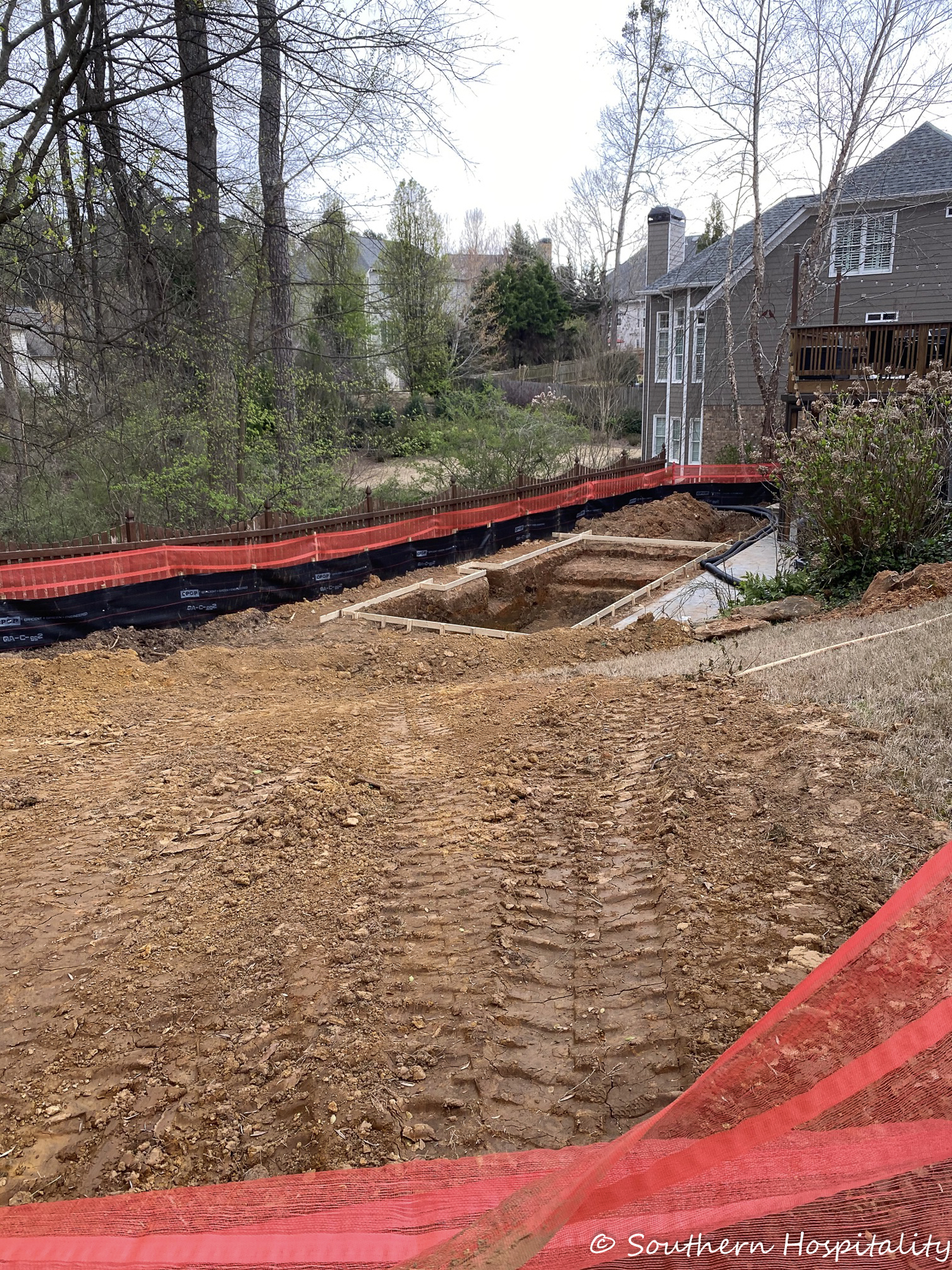 Looking down from the top of the fence. We are hoping our fence passes inspection, but if it doesn’t we will have to do a plan B for fencing in the pool. 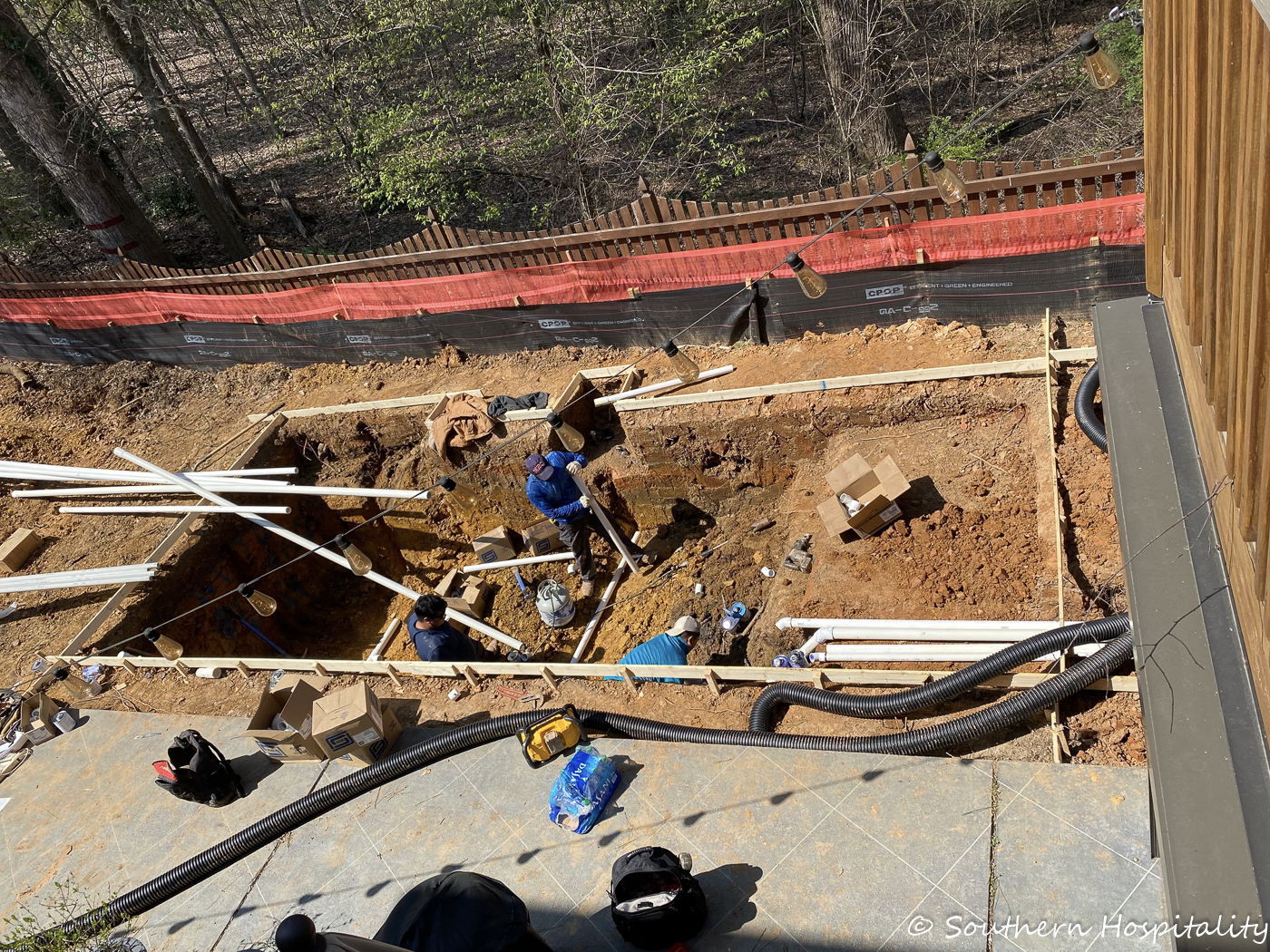 After the dig, a crew came in on Monday and did the plumbing pipes and installed the pool equipment. that was exciting to see too. 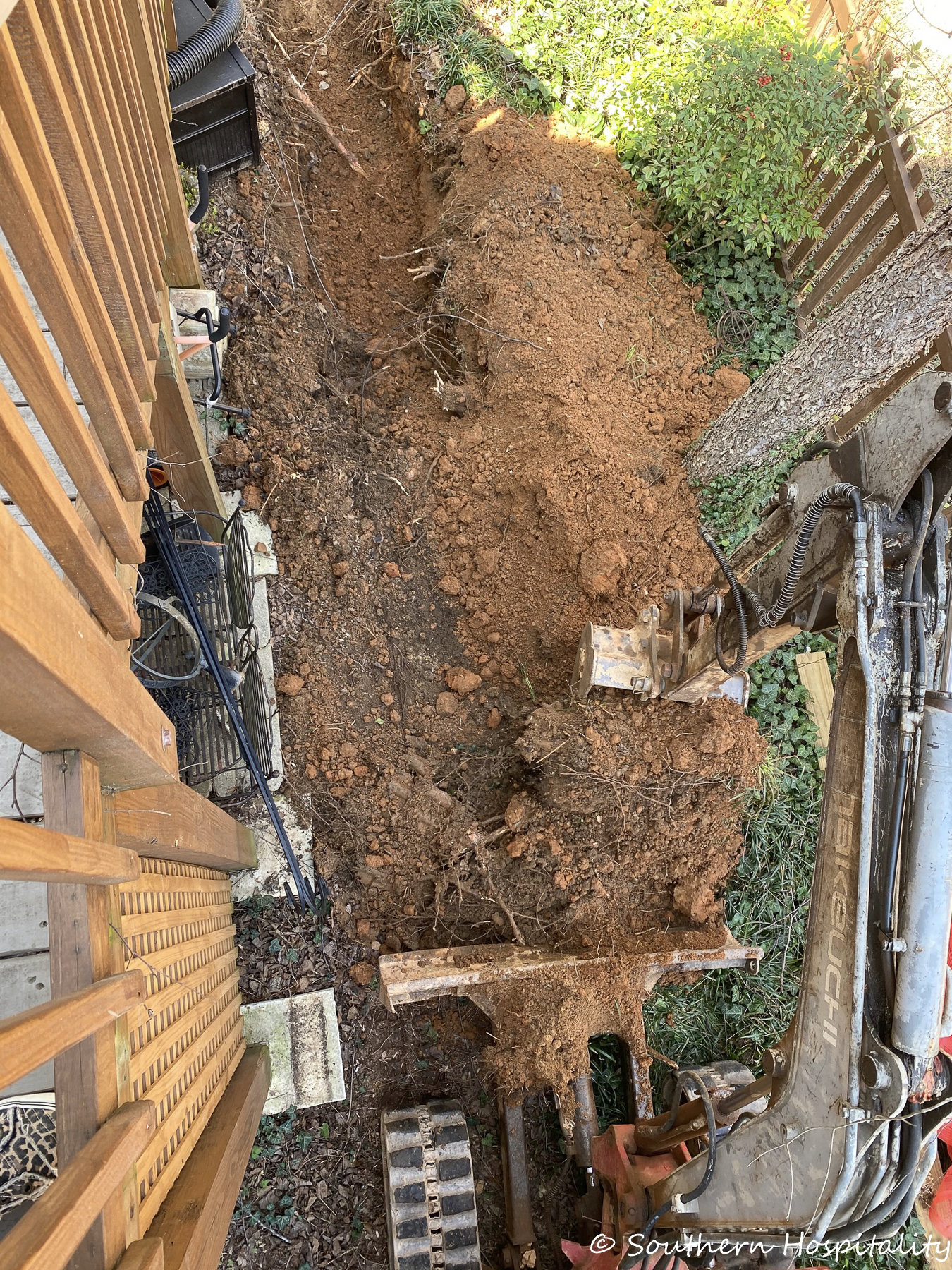 They worked all day. They asked if they could take out a panel of fence on the side of our house where the pool equipment will go and bring in a smaller backhoe to dig out a trench for the plumbing pipes, so we said yes. They did fine and didn’t mess up our lawn on that one. 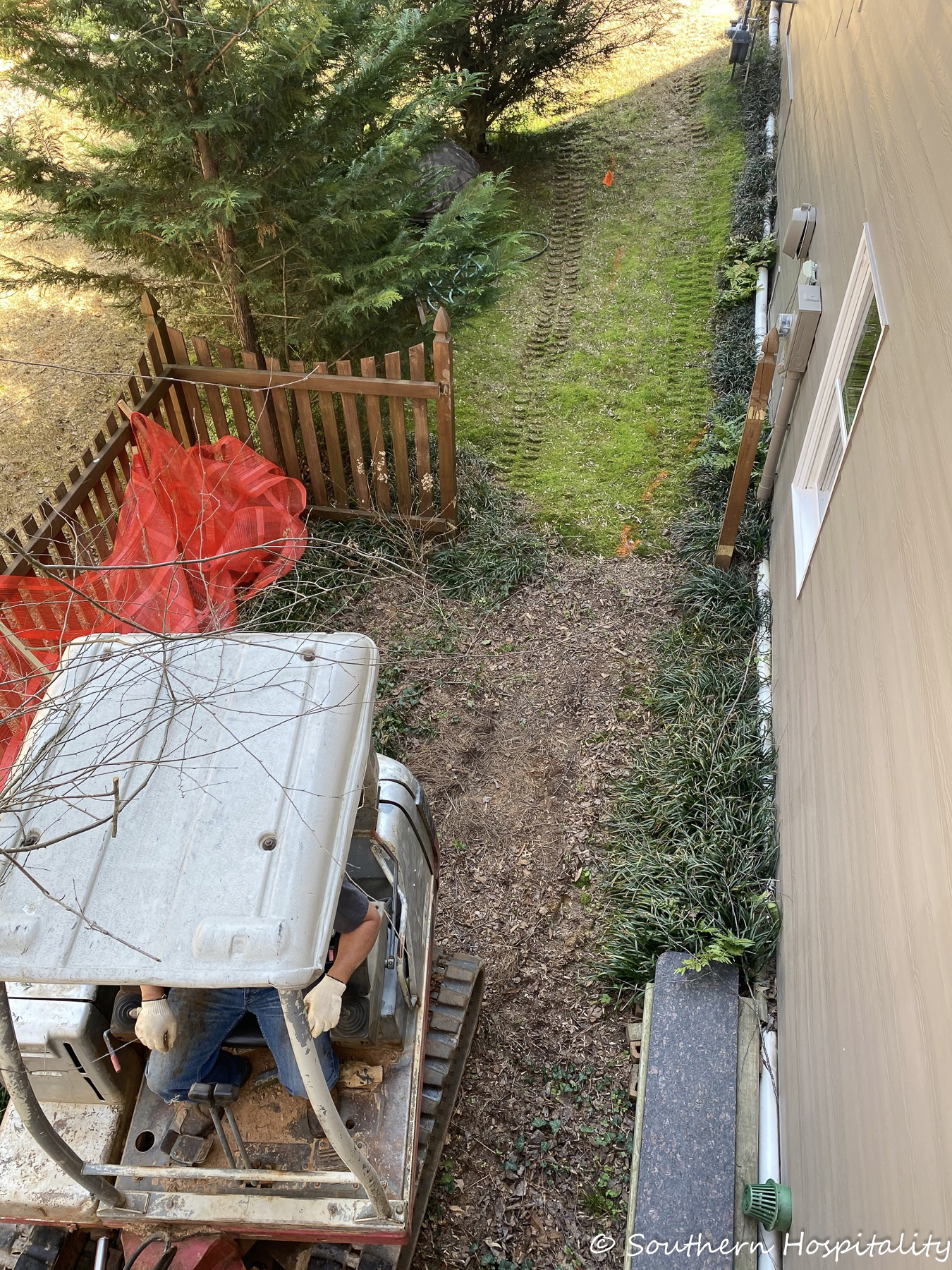 He got in and out without a lot of mess and they put the fence back together. 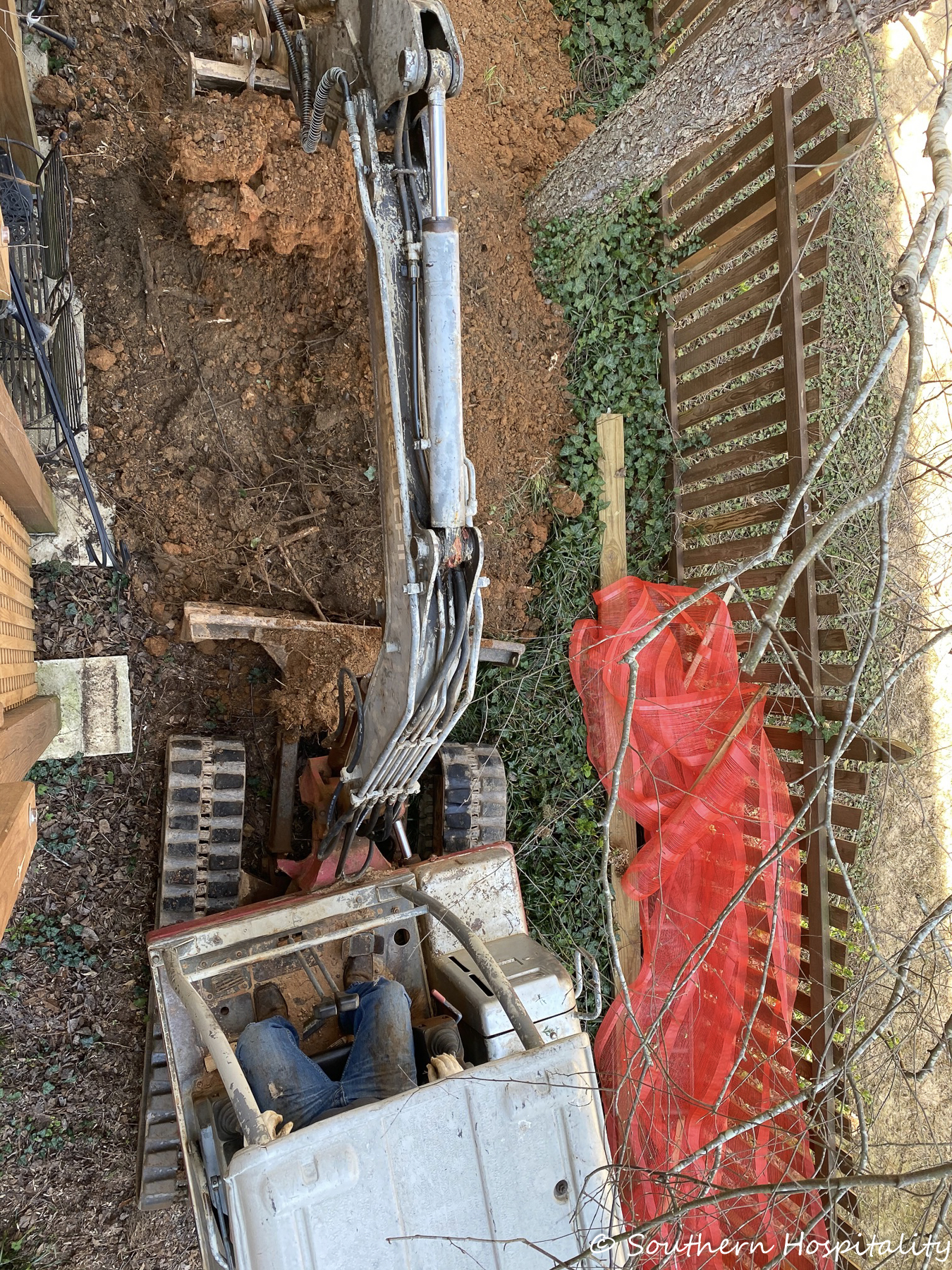 Watching that trench being dug was interesting as well. 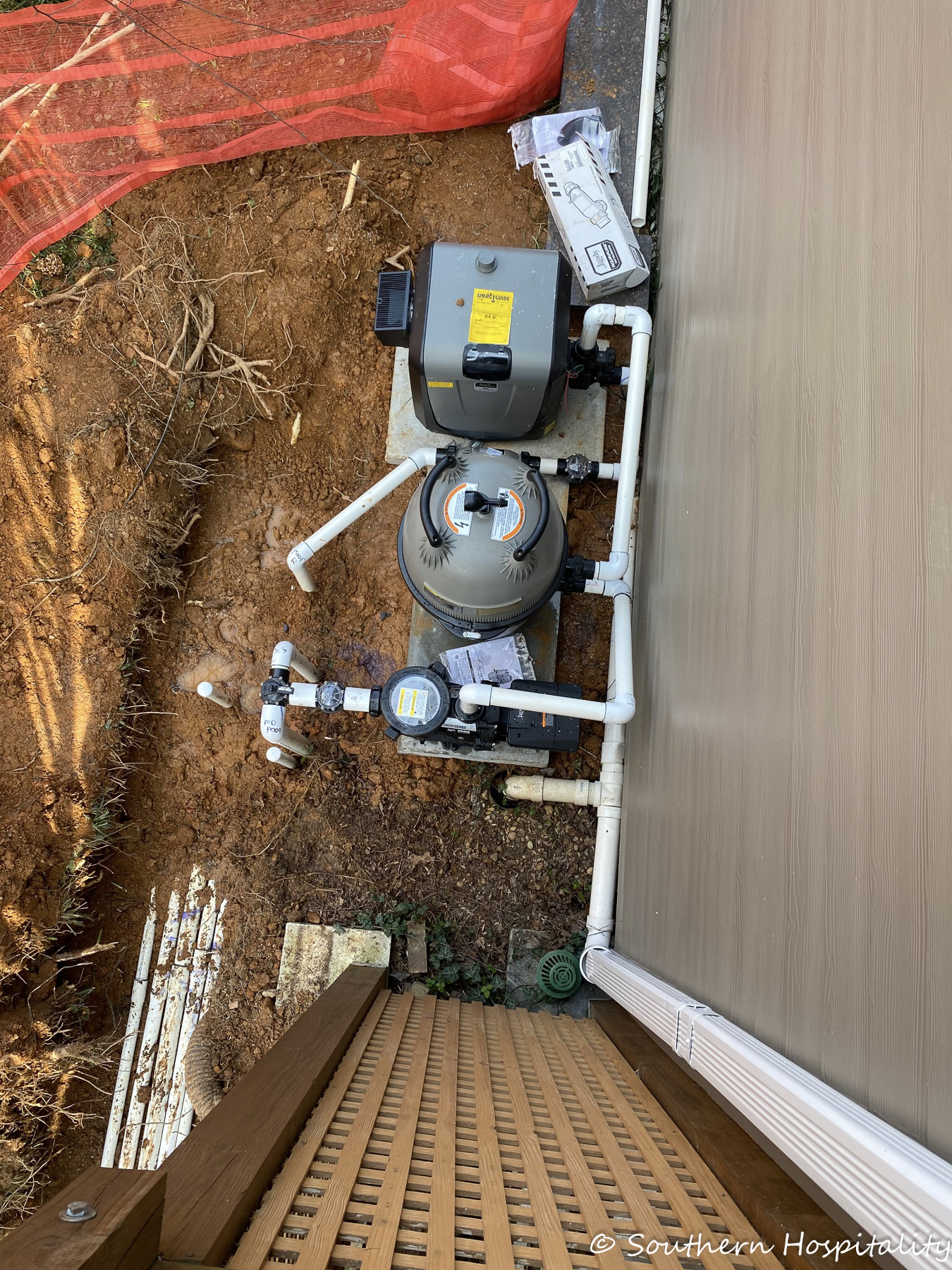 After they finished, I took pics of the pool equipment and it’s bigger than I thought. One of these is a heater I think. I definitely wanted a heated pool. The pool will be salt water too. 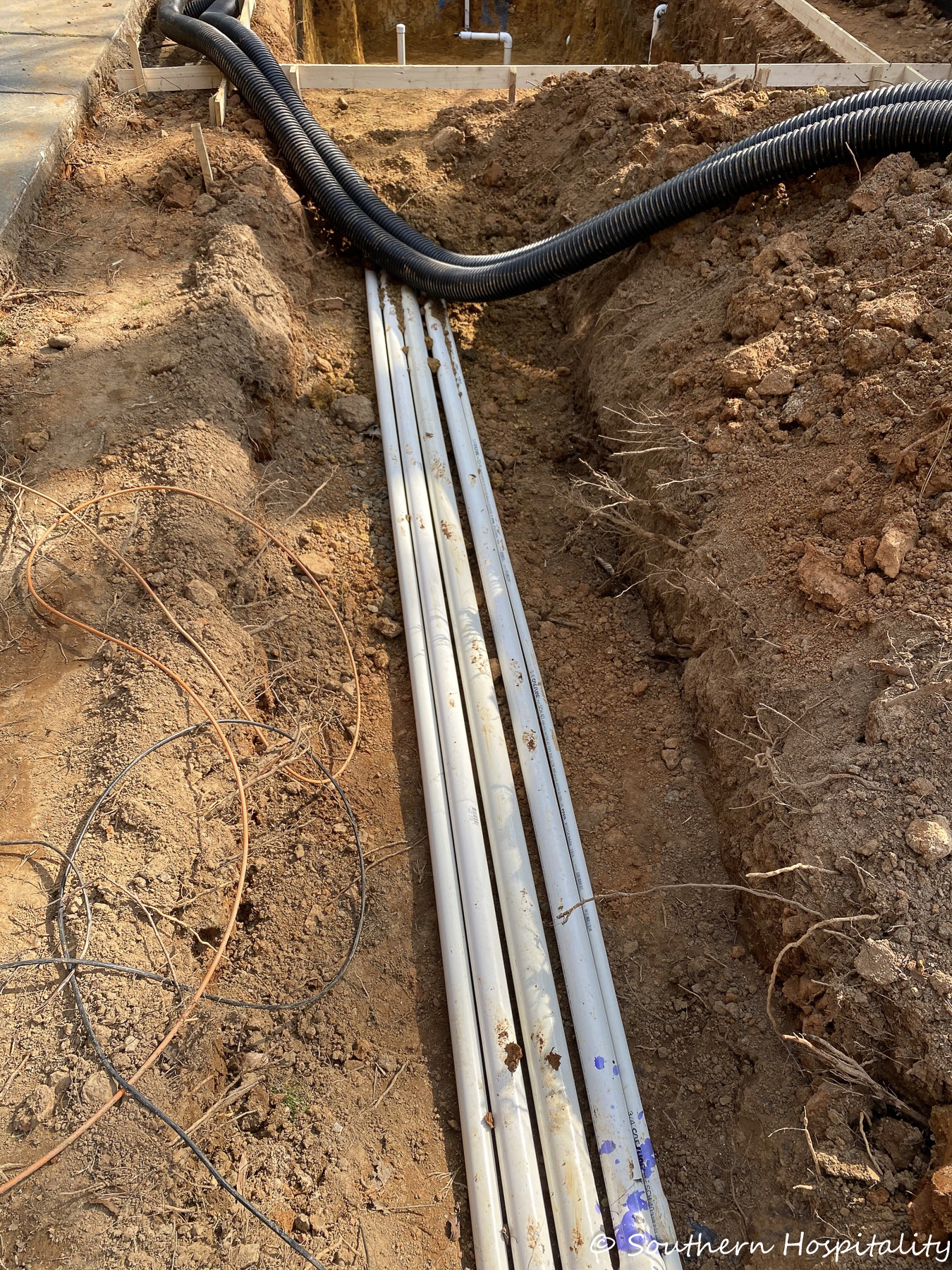 Lots of pipes laid in the trench for the pool equipment. It comes out of the pool and around the corner to the equipment on the side of the house. 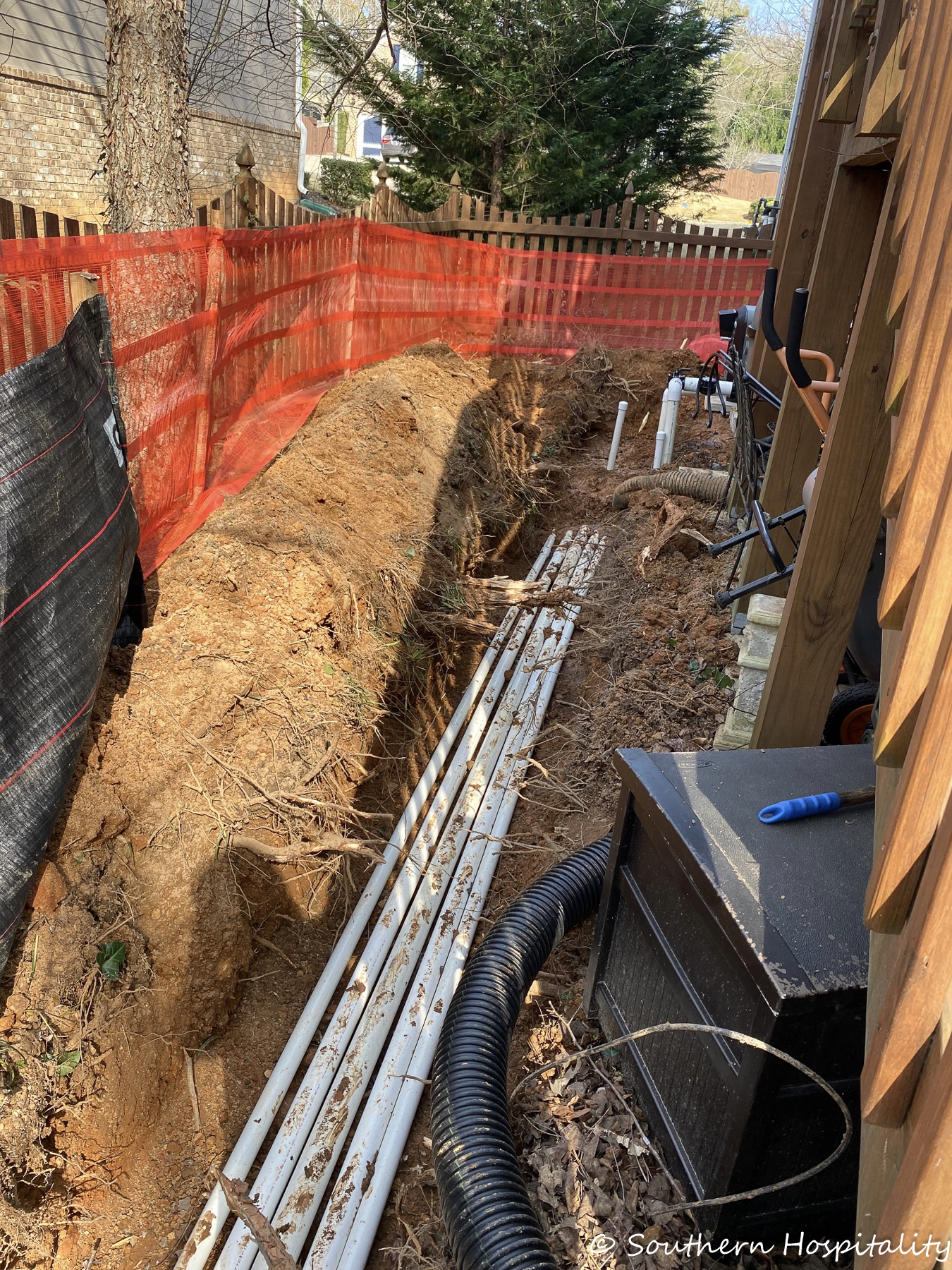 We don’t have a lot of room on this side of the house, but enough for the equipment to be tucked away. 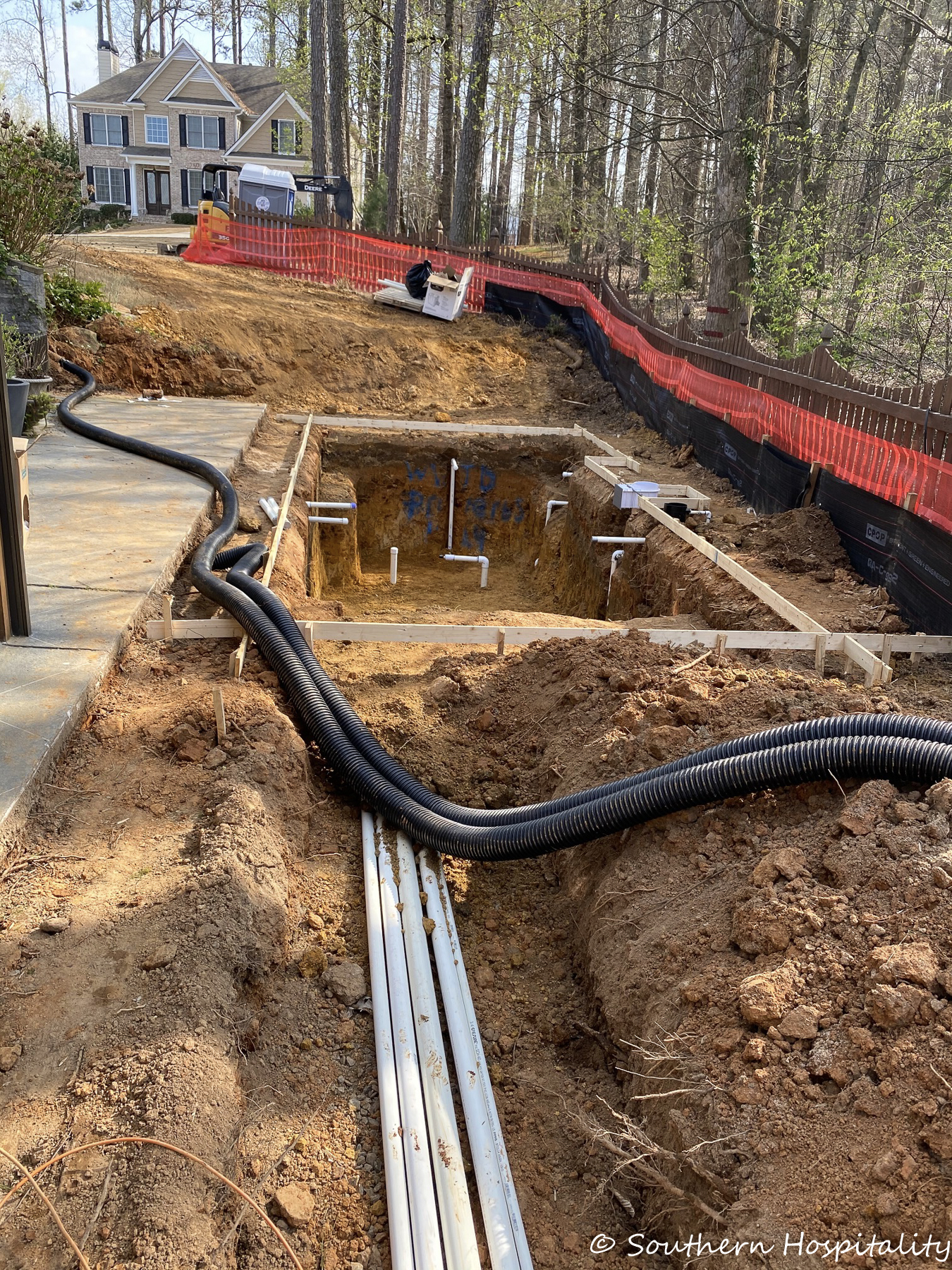 I’m not sure what all the big black hoses are for. 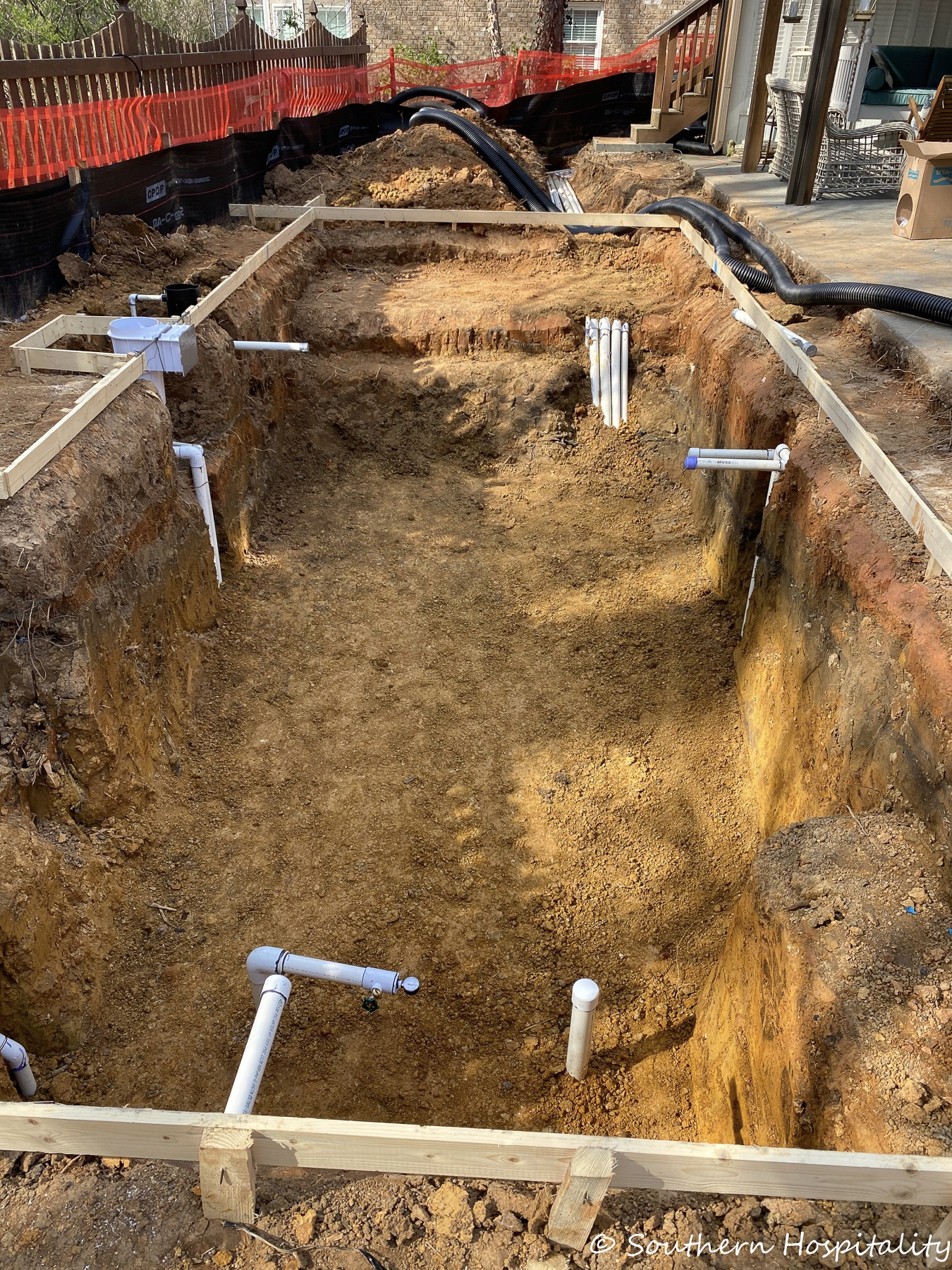 It’s such an interesting process to watch.

Three days later, the rebar crew showed up and did this in about 2 hours. It’s great to see the progress and how fast it seems to be moving in just a week. Next up is the shotcrete, which is the concrete coating. 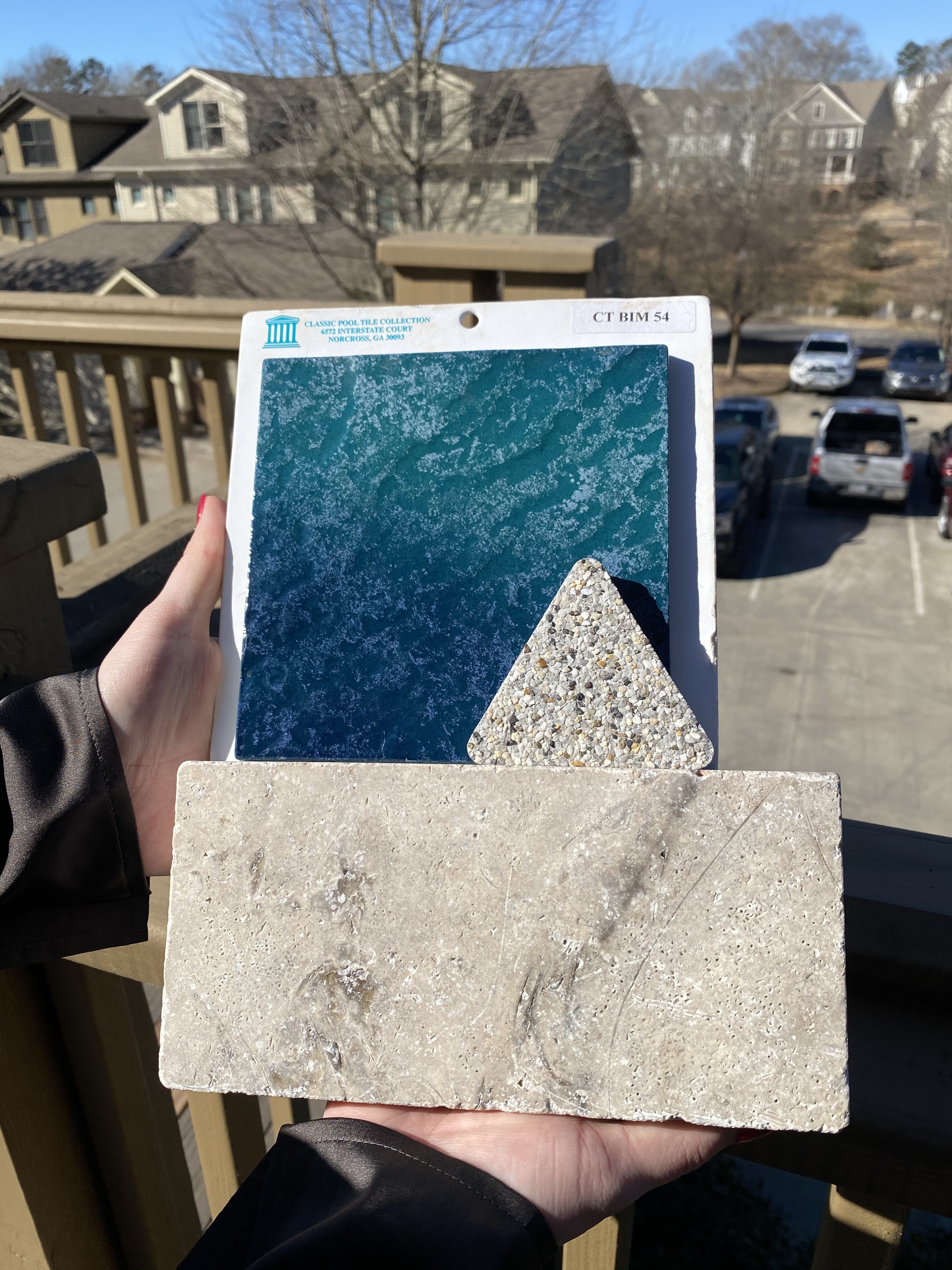 I didn’t share our final choices last time, but here’s what we are choosing. Pebblesheen in French Gray and silver travertine on the pool coping & decking. That’s the waterline tile we’re using too. We both like the blue tones and it has navy and teal on the tile. It’s called Bimini. We think we will love these choices. 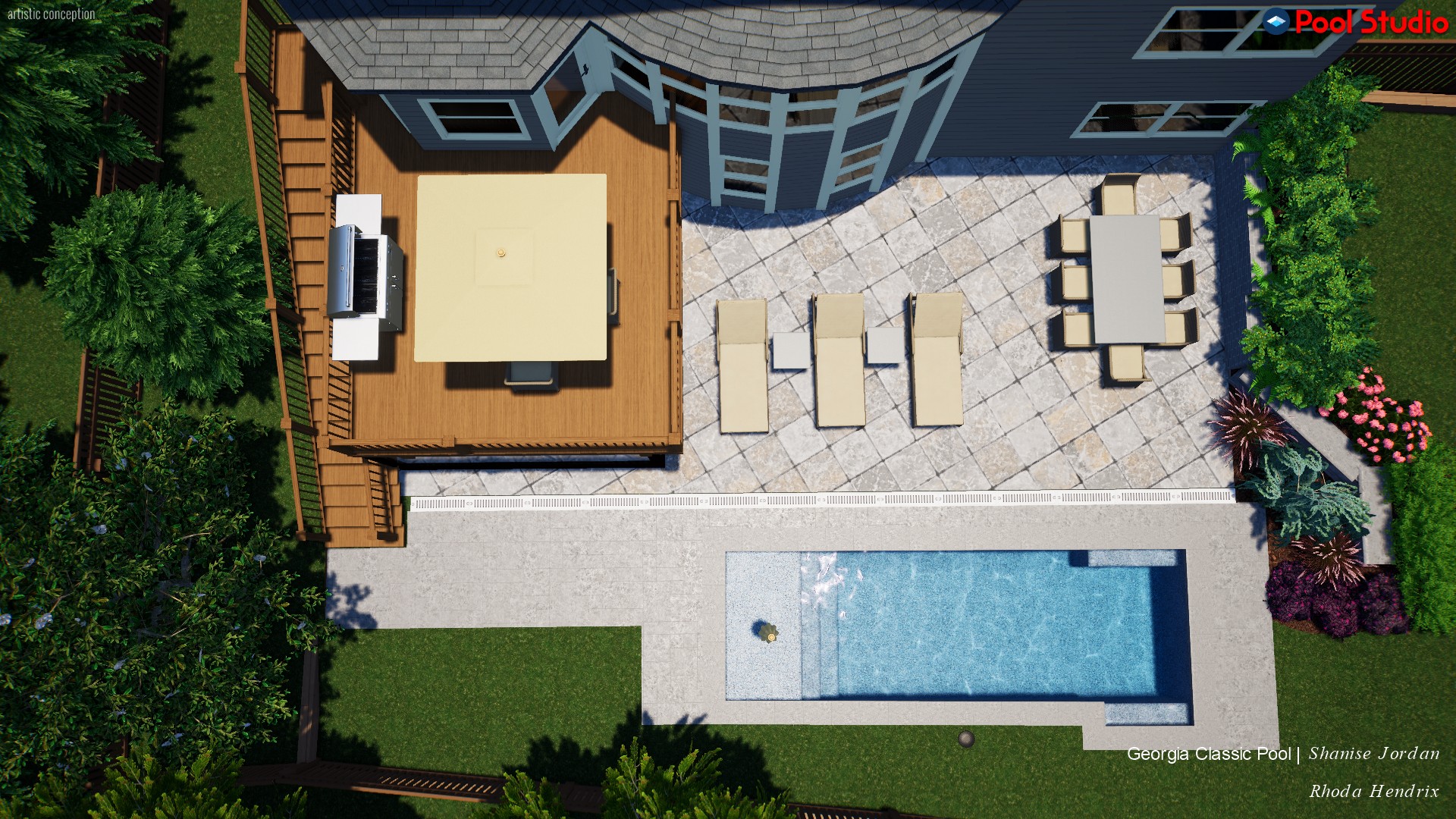 And here’s the final rendering for the pool. I will be so happy if it turns out to resemble this view. We took out the planter box in front of the patio screen that she had in the first drawing. With the screen there we didn’t want anything blocking that screen and plants would get in the way and be messy. The less dirt the better. We will have plenty of time to figure out landscaping later and we’ll be re-landscaping in front of the little retaining wall that’s going in on the right. That’s where we lost the big azalea and ferns.

I have a whole list of the schedule and what comes next, so we really hope they keep moving like this and we might be in before end of July. I’ll keep you posted! It’s such an exciting process to watch and we are so excited to get our pool finished so we can use it. It will be at the hottest part of the summer when we can finally get in there and we can’t wait!